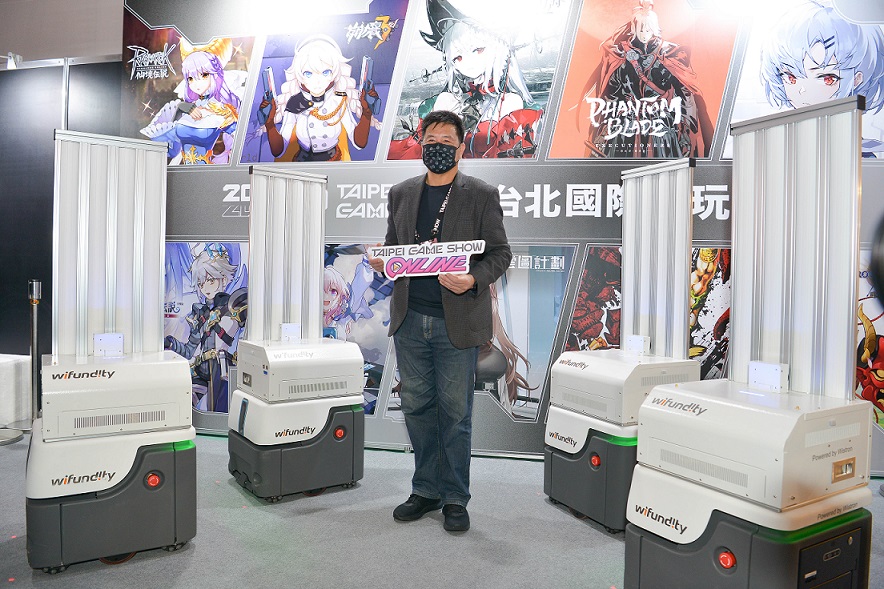 Taipei Game Show 2022 (TGS) kicked off yesterday at Taipei Nangang Exhibition Center, Hall1 (TaiNEX1). Same as last year, the opening ceremony was presented as a mix of live (physical) and online (virtual) events, with equally stringent yet more efficient anti-pandemic measures. Unprecedentedly, the entrances to the show floor were guarded by spray disinfection robots, complementing the standard anti-pandemic procedures, followed by a full sweep of the entire exhibition hall by medical-grade UV disinfection robots after the show closed every day. On the first day of TGS, passionate visitors all followed the anti-pandemic procedures as they entered the exhibition hall in an orderly manner. The disinfection robots even became an attraction that many visitors took pictures with the robots as they waited in line to get admitted.

The B2C Zone was started with a full agenda on the first day. The upcoming Korean MMORPG "Odin: Valhalla Rising" chose Taiwan for its overseas debut. The super-sized TV walls and hands-on areas drew many visitors to its booth to get their first-hand experience of the game. Even more impressive was its magnificent six-meter tall booth setup. On top of all that, it also invited popular streamers to show the gameplay in friendly competitions. "Ragnarok Online," now in its 20th year, featured its latest installment of the series. Exhibiting in Taiwan for the first time, "Romancing SaGa Re;univerSe" presented video interviews with its series director and producer from SQUARE ENIX Japan, plus live appearance of its famous collaborating Taiwanese artist to interact with the visitors.

"Genshin Impact," the cross-platform blockbuster that had just won three major awards in the "2021 GAME STAR" gamers' vote, attracted tons of visitors to its booth. PUBG MOBILE, on the other hand, continued to feature its collaboration with Spider-Man through exclusive events.

Not only was the B2C Zone loaded with endless fun, the TGS eSport Red Carpet was also filled nonstop tournament matches. Among which, the competition in the "VALORANT" TGS Finals was especially intense with countless fans crowding in front of the stage to watch the competition. The two finalist teams battled to a 1-1 tie in the end and agreed to have another match on another day, leaving the audience in great expectation. For all viewers around the world to enjoy the program, 2022 Taipei Game Show ONLINE provided both Chinese and English subtitles in select periods of the program. In addition to the YouTube channel "DoNotNOW" and Twitch channel "TGSlive," the program was also broadcast through 17LIVE, AfreecaTV, and Huya.com, giving viewers across all Chinese-speaking regions, Korea, and Southeast Asia the best viewing experience available to them.