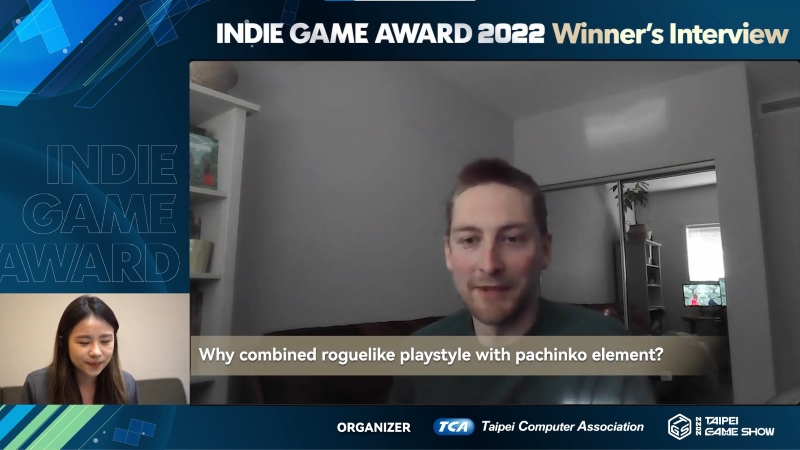 From Game Jam to winning Best Design: The story behind Peglin

Peglin, the game that won Best Design, is developed by Red Nexus Games from Canada. The founder Dylan Gedig said that Peglin was originally a mini game developed by 2 developers in 48 hours at Orca Game Jam 2019. However, the COVID-19 pandemic drastically changed the lifestyle for everyone, and gave the studio an unexpected opportunity to invest more time into the development of the game. It is how Red Nexus Games turned the mini game into an IGA award–winner. Winning the award is definitely a spirit-lifting news to the developers. Peglin delivers unique gameplay by combining pachinko and roguelike playstyle. Players control an adorable goblin and deal damages by playing pachinko. In the process of defeating the enemies, players will be able to acquire special relics that radically boost protagonist’s ability and change the gameplay, and to unveil an intriguing backstory as well.

Dylan Gedig pointed out that Peglin was born out of Orca Jam 2019. After Orca Jam, the members in Red Nexus Games banded together to develop a full game. The game in its nature is full of randomness. How to balance the procedurally generated levels was the biggest challenge for Red Nexus Games during the development. The developer has launched the game into early access in order to collect feedback from the players. The studio is looking forward to tackle the full potential of the roguelike mechanics and continue to expanding the game content. The studio wants to ensure that every game session delivers a brand new experience to the player.

Q1: Please tell us about yourself.

A1: Hi! I’m Dylan Gedig, the founder of Red Nexus Games. I’ve been making games for the last 10 years, and have been releasing indie games commercially since 2016.

A2: Peglin originated at a game jam, where we set out to make a game in 48 hours with the theme of “Fall”. We started with the battle system, and we had one playable battle at the end of the jam. That version can actually be played here: https://gedig.itch.io/goblin-drop-jam It’s fun to see how far we’ve come since then!

After the jam we continued to work on the game, and we were originally planning for it to be built out as an RPG. However, once we started experimenting we quickly realized that making Peglin a Roguelike would be a better fit. That allowed us to create some really crazy relics without worrying too much about skewing the balance of an entire 10+ hour campaign.

Q3: How did Peglin move from a side project to a complete game build?

A3: After the initial jam game, which was made by just 2 people, we continued to work on it for a few months until the pandemic started. At that point since we had so much more free time all of a sudden we decided to really focus on it and build it up to something that we could proudly put on Steam. Plus with how lighthearted the game was it made for a great creative outlet (or distraction!) for everything that was going on. We added a few team members at that point, all working evenings and weekends on the side of full-time jobs, to build Peglin up a bit more. I’ve actually only been working on the game full-time since August 2021 when it started to become really obvious that the game was resonating with players - the others are all still working part-time but we’re hoping to change that after our Early Access release!

Q4: The pachinko playstyle makes the gameplay extremely unpredictable. Sometimes it requires good luck to beat the game. Why did you design it in this way? Is there any member from your team who is considered to be the luckiest when playing Peglin?

A4: We started from the pachinko side and then built the rest of the game around that, so that unpredictability has definitely been part of the design from the very beginning. It can be really tricky to balance sometimes, in a normal RPG you might have an attack that deals 40-60 damage, in Peglin you can deal anywhere from 0 to 50000, especially in the later areas! This does have some benefits for balancing too though, since we can change the difficulty not only by changing stats on the monsters but also by changing the difficulty of their peg layout. This is one of the biggest reasons why we’re launching into Early Access, so that we can gather a tonne of data and make sure that by the time we reach our 1.0 release the game feels extremely balanced, fun, and fair!

Q5: There are many in-game events in Peglin. Can you share with us on how many route combinations can be expected in the game? Will the players be able to learn more about the protagonist's story in the full version? Is it possible to reveal some exclusive information to our readers?

A5: Our goal is to have enough content that each run of Peglin feels completely unique. From what we’ve seen from players enjoying the demo I would say we’re on the right track, but the nice thing about a roguelike style of game is that we can continue to add content and have that possibility space get bigger and bigger!

We do have a decent amount of backstory for the setting that Peglin takes place in, and we definitely want to allow players to explore that more through events in the full version. However we don’t want to force it on people that are just there for the physics-y fun, so we’ve got a bit of a balance to strike!

A few things that haven’t really been shared anywhere yet are that the world that Peglin takes place in is named Radia, a hollow planet with terrifying creatures living inside of it. The deeper you mine, the worse things get…

Q6: Please share with us on the most impressive thing about Peglin.

A6: Two things immediately jump to mind. The first is technical, and it’s the work that’s been done for our aim predictor. It’s not just a prediction, it’s actually simulating the shot exactly as it will fly. The work that our other programmer, Lucas, has done on this has been amazing, especially as I keep throwing crazy things at him like moving pegs or black holes!

The second is that I am just incredibly impressed by our community. I set out to develop Peglin for myself and some of my friends and I never really expected it to find an audience at all, but with our demo acting as an open beta and with the help of shows like the Taipei Game Show, the Tiny Teams Festival, and PAX, we’ve managed to reach an amazing group of people that have helped us out immensely with playtesting, localizing, and sharing the game even further!

Q7: Does anything change after winning Indie Game Award 2022? What’s your next step after this interview?

A7: Nothing has changed drastically since winning the award, we’ve still been working hard to get the game ready for Early Access! The award was a fantastic boost for motivation though, and it’s really helped us make the last little push for the first major Peglin release!