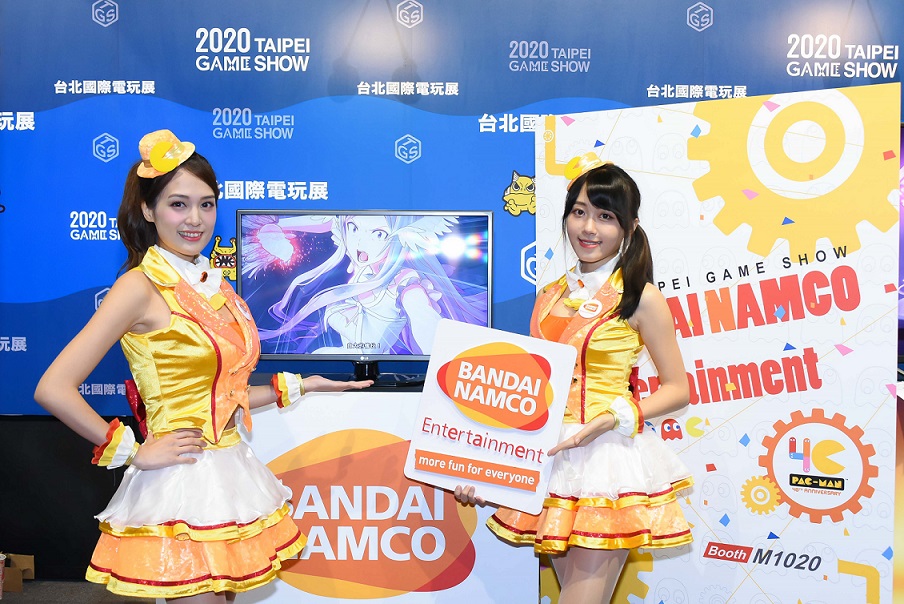 With a total of 350,000 expected visitors in 4 days, the latest opening hours for B2C Zone are now 9:00-17:00. The exhibition space will span across two separate floors, featuring console, mobile, PC/online, AR/VR, and arcade games. Some of the blockbuster titles will have their Asia debut or Chinese versions unveiled at the event.

Sony Interactive Entertainment Taiwan Limited will be showcasing multiple PlayStation® 4 and PlayStation® VR games centered on the latest theme of "You’re A STAR" in three featured areas for FINAL FANTASY VII REMAKE, NIOH 2, and The Last of Us Part II. An unprecedented event—the finals for MONSTER HUNTER WORLD:  ICEBORNE TAIWAN CHAMPIONSHIP—is also to be held on Feb. 6. BANDAI NAMCO Entertainment Taiwan Ltd. will feature its latest blockbuster games including ONE PIECE Pirate Warriors 4, SWORD ART ONLINE Alicization Lycoris, and MY HERO ONE'S JUSTICE 2, coupled with the celebration for Pac-Man's 40th anniversary. SEGA Games is bringing more than 10 new games to the show including Yakuza7. Previously undisclosed content from Cyberpunk2077 will also be premiered to a select audience. The first-time exhibitor JUSTDAN will demonstrate multiple Nintendo Switch and PlayStation® 4 games such as Ring Fit Adventure, Pokémon Sword & Shield, and Resident Evil: Project Resistance. UBISOFT will put up some its official gaming gear and game titles for sale at the event.

With over 24 million downloads, MADHEAD's Tower of Saviors will be casting a group of 23 cosplayers for fans to take photos with their favorite in-game characters. KOMOE GAME will be featuring the Chinese version of its super-popular Fate/Grand Order, as well as Final Gear, which features well-known voice actresses. Google Play will be showing Soul of Edens, Detention, and other premium Taiwanese games in its dedicated areas. Netmarble Corporation will demonstrate an RPG The Seven Deadly Sins: Grand Cross and an MMORPG Blade and Soul Revolution. Exhibiting at TGS for the time, GungHo from Japan is bringing its mobile collectible card game TEPPEN and the TEPPEN TAIPEI GAME SHOW CUP tournament to the show. GRAVITY INTERACTIVE is planning to showcase two new titles from its Ragnarok Online series. Other highlights at B2C Zone include the mobile game Epic 7 (distributed by Smilegate, created by Super Creative), SEGA AMUSEMENTS’s arcade game Dragon Quest Scan Battlers, and the popular game streaming platform Twitch.

Popular Taiwanese eSports brands will all be exhibiting at the show. Republic of Gamers (ROG), for one, will not only showcase its latest ROG Z11 ITX gaming case (unveiled at CES 2020), it will also host the very first Tom Clancy's Rainbow Six: Siege Official League Taiwan Championship tournament in its booth. Lenovo Legion is working with EA to bring EA's AAA title Star Wars Jedi: Fallen Order to the show for gamers to experience it firsthand. AORUS is expected to release its latest AORUS GeForce RTX 2080 SUPER 8G graphics card. The popular French professional Counter-Strike: Global Offensive player KennyS will show up in its booth and engage in activities with fans. MSI will showcase its latest MAG Core Liquid AIO cooler unveiled at CES 2020, while also engaging gamers in one-on-one Call of Duty challenges.

Thermaltake will feature the Level 20 RGB gaming keyboard to celebrate its 20th anniversary. HyperX is allowing gamers to get their hands on its HyperX Cloud Flight S wireless 7.1 surround gaming headset. Logitech G, the gaming and eSports brand of Logitech, will feature its ultimate gaming headset G933s and the gaming mouse G502.  Acer will be announcing its next-generation eSports platform Planet9, which allows gamers to build and train their teams. The platform will be made available to gamers starting January 30. Cooler Master debuts its latest TD500 MESH case in Asia. The lightweight MM711 RGB gaming mouse and the ergonomic Caliber R2 gaming chair will also be available for gamers to experience with the Call of Duty: Modern Warfare hands-on free trial. Corsair is formally exhibiting at TGS this year to promote its Corsair gaming gear, DIY components, and the Elgato livestreaming equipment.

INDIE HOUSE, which will be featured in both B2B Zone and B2C Zone, has attracted 233 indie exhibitors from 21 countries—128 of them (from 19 countries) to be exhibiting in B2C Zone for 4 days throughout the entire show. Some of the prestigious exhibitors include the PAX AUS Indie Showcase 2019 winner Team Fractal Alligator (Australia), the Gamescom Indie Award and Newcomer German Videogame Award winner Mooneye Studios (Germany), and Best Game Audio winner at the Baltic Sea Games Award Ichigoichie Games (Sweden).

This year, BoardGame Wonderland will feature 35 board game designers and studios, bringing nearly 80 games to the table across a range of genres including party games, family games, card games, and puzzle games. In addition to Taiwanese designers, TGS has also invited a lot of overseas designers such as Liner Note (Hong Kong), Little Future (Japan), Origame (Singapore), and Capital Gains Studio (Singapore). A new addition this year is the Board Games Battlefield, where tournaments for some of the popular games such as KeyForge, Yu-Gi-Oh!, and Magic: The Gathering will be held. Moreover, the winner of the KeyForge tournament will be qualified for its World Championship tournament.

Also new this year is the TGS Party Stage, which is dedicated to INDIE HOUSE and BoardGame Wonderland, where a total of 16 exciting events and performances will take place during the 4-day exhibition, in addition to the ACG and IDOL Mini Live concerts from 12 performance groups.

This year, B2B Zone is a joint effort between TGS and Digital Taipei—the digital content summit & fair organized by Taiwan's Industrial Development Bureau, Ministry of Economic Affairs. A total of 280 gaming companies from 22 countries including Brazil, China, Japan, Israel, France, the U.S.A., Hong Kong, Malaysia, Philippines, Singapore, Germany, Korea, and Taiwan will be here in B2B Zone. Among which are some of the industry leaders like G-angle and SUCCESS from Japan, Tencent Technology (Shenzhen) from China, NHN Corp. from Korea, and Kochava Inc. from US. To promote international exchanges and partnerships, TGS has also invited a number of exhibition organizers and industry associations including BitSummit (Japan), BIPA (Korea), GCA (Korea), G-STAR (Korea), Barsil Game Show (Brazil), gamescom asia (Singapore), ESGS (Philippines), and MDEC (Malaysia).

As an effort to help drive the development of Taiwan’s digital entertainment industry, TGS is working with Industrial Development Bureau, Ministry of Economic Affairs to host an exhibition for Taiwanese ACGN-IP within TGS 2020, featuring nearly 100 original IPs including animations, comics, games, and novels (hence the acronym ACGN) from 26 Taiwanese publishers, highlighting Taiwan's creative potential while creating opportunities for domestic and international cross-disciplinary partnerships.

Boasting the biggest indie game show in Asia, INDIE HOUSE at TGS 2020 will have 233 indie game exhibitors from 21 countries (40% from Taiwan and 60% from oversea), and 166 of which will exhibit in B2B Zone. The Indie Game Award, which is dedicated to outstanding indie game developers, has announced this year’s nominees back in December 2019. The final winners from all 9 categories will be announced in the award ceremony at 4:00 p.m. on Feb. 6.

As of this writing, trade visitors from 24 countries have enrolled in our Trade Visitor Registration program, including those from Afghanistan, Bangladesh, and Spain, who have never attended TGS before. Registration is free of charge for gaming-related professionals before January 31. Non-registered guests will have to purchase tickets at the entrance.

Finally, INDIE SALON will be hosting 14 speaking sessions in a two-day agenda. Award-winning indie developers including Brace Yourself Games from Canada, Motion Twin from France, Devespresso Games from Korea, Ichigoichie from Sweden, Metronomik from Malaysia, Momo-Pi from Switzerland, and Muse Games from US will be sharing their insights and experiences on indie game development.