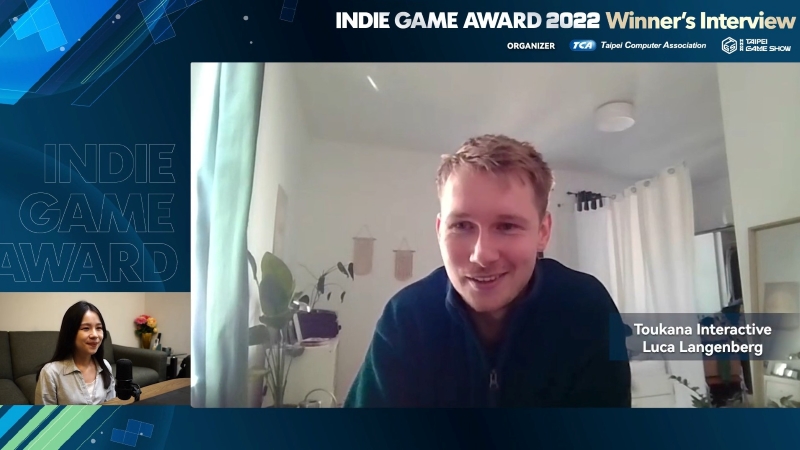 “Dorfromantik” A Relaxing Puzzle Game that Relieves Your Stress and Anxiety. Dorfromantik, developed by Toukana Interactive from Germany, won the category of Best Innovation Game in IGA 2022. The team was determined to make a relaxing puzzle game from the very first beginning. One of the founders of Toukana Interactive “Luca” mentioned that, it truly means a lot to the team when players mentioned in the feedback that Dorfromantik delivers an engaging and enjoyable gameplay that effectively reduces their anxiety during the pandemic. Q1: Please tell us about yourself and Dorfromantik.

A1: I'm Luca, one of the four founders of Toukana Interactive. The company was founded two years ago right after university with my three friends, Timo, Zwi, and Sandro.

Dorfromantik is our first commercial game title. It's a relaxing city builder/puzzle game, in which players build landscapes out of little hexagonal tiles. Those tiles are created randomly. Players also have to solve quests and puzzles perfectly in order to reach high scores and rewards.

In the team I'm basically like the all-round artist, I'm responsible for the graphics and the looks of the game, but I also do game design, which we all did together in order to make the game fun.

Q2: What is the inspiration for Dorfromantik?

A2: It was created first at the Ludum Dare Game Jam which we attended in April, 2020. The theme of the jam was "keep it alive". We thought about having a game where you have to keep a system alive or running by puzzling really well.

And for inspiration I would say that, we didn't look too much at other games for it. A lot of people compare the game to the board game "Carcassonne", which is also from Germany, because the tile laying mechanic is pretty similar. But we tried not to look too much into other games because we don't want to copy anything. We wanted to stay innovative.

From the beginning it was clear we wanted to have a non-violent game. We always wanted to write this narrative of a relaxing puzzle game, where you can just unwind after work, or maybe like play it during the boring Zoom calls at work or something. On the other hand, we wanted something that's really easy to get in but also really hard to master. Therefore, we tried to put a decent amount of strategy into the game as well. We tried to balance both sides and that was the plan for Dorfromantik basically.

Q3: Please share with us the most impressive player’s achievement that you have seen in the community.

A3: It was crazy because on the first day of our launch of the early access in 2021, there were already players that surpassed our high scores. Our internal high score at the release was 35k. We thought that would be really high. However, there was one player who already did 100k on the first day. In a few months later there was another guy who did 2 million. I think at the end of early access, where we reset the high score board, the best game session from the players was at around 4 million, which is totally crazy.

We have a pretty huge community on Discord. There are different rooms for different kind of things, such as a creative showroom where everybody can build creatively. And there are people who do crazy stuff. For example, there's one guy in our community who built a huge island that looks like dragon with a crazy amount of detail and stuff. It's really awesome!

Q4: What is the in-game art design based on? Is the art style inspired by the landscape in Germany?

A4: For the art, we wanted to have something that is very stylized and like a simpler version of European landscape. The three of us in the team come from Germany and we all grew up from the countryside there, and one other team member comes from Switzerland. Therefore, we really wanted to get that kind of nostalgic feeling into our art style.

Simplicity was also really important for us because for such a game, it's super important that you can just look at the game at a glance and you see everything and don't have to search for certain elements.

A5: It was very cool to see that our game gets so much attention in Taiwan and in Asia in general. We could also see that the sales really increased from the beginning of the year. It was really amazing!

Q6: What is the next step for the studio?

A6: We just released our full release and it went pretty well. We will keep pushing little updates into this summer. We're also looking into new platforms, which is really interesting for us. Unfortunately I can't say which now because it's a secret..., but I can say that this year will still be a very good year for people who enjoy Dorfromantik.

For the DLC, we really want to get into other regions in Dorfromantik. We can accomplish that maybe through other biomes. Stuff like a desert biome or something…, we've made some concepts for that, and we have more ideas but I can't say which one will really get into the game.

Q7: What is the most touching feedback you have received from the players?

A7: It was a lot! I can't say anything specific on what it was, but what really moves me is that during COVID, a lot of people told us that the game, because it's so relaxing and addictive, it’s really helping them to unwind and to overcome anxieties and stuff during COVID and the crazy time. I think for the whole team it was huge to hear something like that. It’s really cool to know that we can help people to achieve something like that with our game.