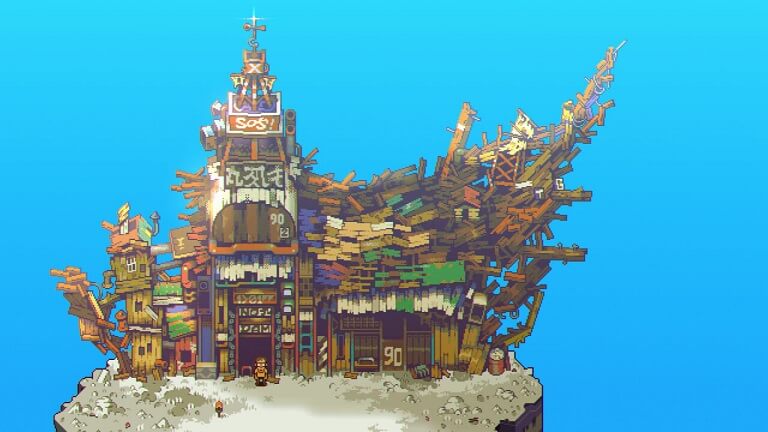 Taipei Game Show 2020 (TGS 2020) did not have the chance to meet its fans in person this year due to the global pandemic. However, with the rapid advancement of technology, TGS2020 was able to bring the best contents in the game industry to the eyes of the gamers. As the organizer that holds the largest indie game section around the globe, Indie Game Award Online Ceremony was introduced this June to recognize the accomplishments of talented indie game developers. After the online ceremony, we took the opportunity to have an in-depth talk with the award-winning teams to get to know how receiving the award means to them. This year's Best Visual Art Award winner is China’s Pixpil Games, who developed Eastward. In this interview, they talked about their game development experience, and offered their acceptance speech.

Stick to every detail

Eastward’s plot is set in a world where human civilization is gradually collapsing. The game depicts the near future with a touch of an apocalyptic, decaying style. Combining 2D graphic style with a 3D lighting system, Pixpil Games makes each frame rich with details. The finely crafted art design and attention to detail caught the juries’ eye—and the eyes of many players—at Taipei Game Show, where Pixpil’s efforts won them the 2020 Indie Game Award for Best Visual Art.

The Pixpil Games development team stated in the interview that receiving the Best Visual Art Award is undoubtedly a huge recognition of their hard work and dedication. They thanked the juries and the players for their approval and support, which gives them the confidence to continue working towards their goals. Pixpil Games stressed that Eastward’s art development accounted for more than half of the game’s total development time. In order to make every detail its best, they carried out two or three major changes on the art alone. Each of the changes is like a process of evolution by which the team aims to offer players the perfect game.

Each character tells its own story

As the game progresses, players may find that almost all NPC characters in Eastward look different from each other. Pixpil Games explained that making every NPC different was not the core goal of their game. In the game’s world, each character’s existence has its own meaning. Making these characters look different from each other allows players to explore deeper into the world of Eastward, and to better understand the stories happening in this world.

Pixpil Games also stressed that, because the game features a set of septuplet NPCs with the same face, the developers didn’t make each NPC look different deliberately. Instead, Pixpil based the design of each character on the story and plot’s needs. More importantly, they had fun with this method of design, as it provides players a different experience from traditional RPG games. Look After Your Health and Never Quit Learning

During the interview, Pixpil Games also mentioned that the most difficult part in the development process is to catch up with the schedule they set for themselves (laughs). Having been through this period of development, the team said that the most important thing they’ve learned is to look after your own health and wellbeing, such as to not sit all day at work, eat meals on time, and maintain a normal daily routine. This is something that has been neglected by people doing development work. In addition to creativity, design and programming skills, staying healthy is another key factor for the smooth progress of the development work.

For those who are interested in game development, the team of Pixpil Games would advise them to look after the health and wellbeing, and to keep a positive attitude towards learning. From their experience, the biggest obstacle in game development would be the competencies of the developers; therefore, as long as you keep learning, update yourself with new information, learn new skills and get to know new things, you will be able to continue working in game development.

Finally, Pixpil Games also emphasized that they hope players would feel fun when playing Eastward, as making a game “fun and interesting" is always the top priority. They will endeavor to bring out more interesting titles. Let’s wait and see.