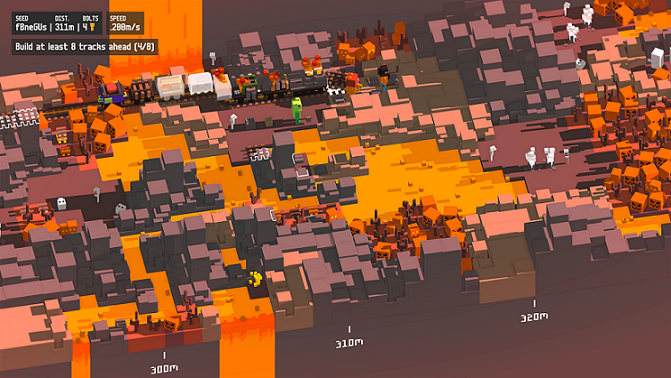 Taipei Game Show 2020 (TGS 2020) could not meet with fans in person due to the global pandemic. However, with the rapid advancement of technology, TGS2020 was able to bring the best contents in the game industry to the eyes of the gamers. As the organizer that holds the largest indie game section around the globe, Indie Game Award Online Ceremony was introduced this June to recognize the accomplishments of talented indie game developers. After the online ceremony, we took the opportunity to have an in-depth talk with the award-winning teams to get to know how receiving the award means to them. This year's Best Innovation Award winner is Switzerland’s Indoor Astronaut, who developed “Unrailed!”. In this interview, they talked about their game development experience, and offered their acceptance speech.

Indoor Astronaut, the developers from Switzerland, said that the team members have always liked multiplayer games such as Halo, Overcooked, and Super Smash Bros. Unrailed!, which nails the spirit of cooperation, battle, and competition, is a comprehensive expression of those games. The co-op multiplayer gameplay of Unrailed!, in which players work together to collect resources and lay railway tracks, won the "friendship destroyer" title soon after it was launched.

Indoor Astronaut said that the core spirit of Unrailed! makes players realize that only good communications and their own skills can help them pass these nerve-racking and exciting levels. If they fail to communicate and cooperate effectively, they will feel the pressure from the game—this is why Unrailed! is categorized as a friendship-destroying game. However, if the players work together, the joy and a sense of achievement from completing the levels promise an unparalleled experience.

The team also mentioned that Unrailed! was initially a small university project; they never thought it would develop into a complete game. After receiving positive feedback and suggestions, the team decided to improve the project, and finally, they developed Unrailed! into a complete game presented to players around the world.

You May Doubt Yourself but Don’t Lose Hope

Unrailed! is quite a special game. Speaking of the ups and downs during game development, Indoor Astronaut said that when you have never developed a game before, you would often fall into self-doubt and wonder: "Will anyone be interested in the game?” Or "Is it okay to do it this way?" But if you’re working with an amazing team that has always been supportive, you will be able to get over your self-doubt and fully concentrate on developing your dream game.

Indoor Astronaut also offered advice to independent creators interested in game development. First and most importantly, financial issues matter. Developing games require funds. A good head start means raising funds from the beginning. Next, collect as much feedback from players as you can— the earlier the better. In this way, you can make corresponding adjustments and modifications in the early stages of development, as it will become more difficult for you to fix bugs or errors in the game as development progresses. And finally, set a schedule. If you already have a schedule in mind, it is better to double the timeframe for a more realistic completion time. Next Step After the Award and Plans in Future

Indoor Astronaut pointed out that it is an extremely high honor for them to stand out among many excellent peers and receive the Best Innovation award. For the game Unrailed! to be recognized by professional judges and players means a lot to them. Their next step will be continuing to develop new content for the game, with plans to have this game ported to various consoles (it has already been ported to Switch). In addition to the original multiplayer mode, the single player mode now is also available to players.

Considering the impact of the pandemic, Indoor Astronaut would also like to call out to Unrailed! fans to take preventive measures against the virus, and stay safe and wear a mask—alternatively, stay at home and enjoy the game!