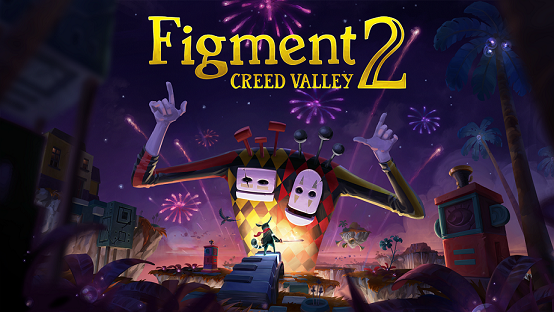 Indie House, one of the world’s largest indie game sections, closed its curtains a few weeks ago. Despite the global pandemic that prevented many teams from travelling to Taiwan in person, the organizer held an online ceremony to honor the recipients of 2021 Indie Game Award. The winner of this year's Best Audio Award is Figment 2: Creed Valley. The developer, Bedtime Digital Games from Denmark, discussed their thoughts on game development and shared their acceptance speech in this exclusive interview with Taipei Game Show.

In the interview, Niels Sørensen, the Lead Game Designer and Sound Designer of Bedtime Digital Games, mentioned that he has learned a lot through the game development process. He thinks that if creating or doing something in the game is fun for him, his work is more likely to be fun for the gamers. When asked about the development of Figment 2: Creed Valley, Sørensen said that the team found many stories in Figment are worth further exploring, so they decided to make the sequel and delve into humanity such as faith, affection, and expectations from others in this unique game.

Bedtime Digital Games also mentioned that Figment 2: Creed Valley is too unique to be defined as a single genre, as the game contains elements of a music game and contents of an action-adventure game. The team combined their favorite genres for expanded possibilities while maintaining the game’s original tone and direction. Start with Small Goals to Achieve Bigger Ones

For would-be game developers, Bedtime Digital Games would advise starting with smaller tasks or projects because game development is not as easy as people think. You may set a huge goal in the early development stages, but the greater the goal, the harder it is to achieve, and you will feel frustrated when you fail to meet the goal with a quality project. Therefore, you’d be better starting with smaller projects, and by gaining a sense of accomplishment that motivates you to reach the next level. If these small projects fail, it doesn’t matter! Keep trying and be realistic. Concentrate on things that you can manage and put these things together at the end.

Next Step After the Award and Plans for the Future

Sørensen expressed that this award means a lot to him and the whole team, not only because it is their first music and audio-related award, it’s also a personal recognition for his efforts. The win encourages him to complete Figment 2: Creed Valley’s follow-up development.

As for their next steps, Bedtime Digital Games will prioritize finishing the final stage of Figment 2: Creed Valley and making this super-cool game available on various platforms for a wider audience. At the same time, the team wants to take this opportunity to express their gratitude to gamers around the world for their appreciation. The developers are thrilled that their game touches people and brings them joy. They also want to thank fans for willing to share their own stories, which means a lot to the team.