TGS Updates
[ IGA2022 ] Blind Drive – The game that is meant to be played with your eyes closed. 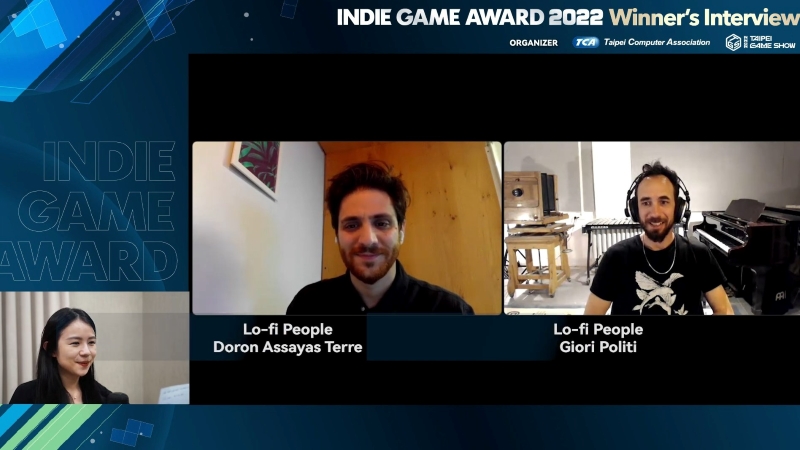 Blind Drive – The game that is meant to be played with your eyes closed. Blind Drive, developed by Lo-Fi People from Israel, won the category of Best Mobile Game in IGA 2022. The developer said in the interview that they wanted to make a game that puts player’s concentration fully on hearing. By relying heavily on sound effects to proceed, the game encourages the players to fully utilize their imagination, which creates a unique gameplay experience like a personally customized VR experience.

Q1: Please tell us about yourself.

A1: We’re Lo-Fi People, a small collective of designers, coders, musicians and filmmakers based in Tel Aviv and active since 2008. Blind Drive is a collaboration between two of us - Giori Politi and Doron Assayas Terre. Giori is an interactive artist and sound designer/composer for games and film, while Doron is an interaction designer and creative technologist specializing in AR/VR and immersive storytelling.

Q2: What inspired you to develop an audio-based game?

A2: We’re all familiar with the sounds of driving, but are rarely conscious of them because most of our attention is on our eyesight. We wanted to flip the script and make a game that places all of our awareness on our ears, forcing us to rely solely on their amazing processing powers - which we often take for granted.

Another major draw for us was the ability of sound to create a deep sense of immersion quite different from what is possible with graphics - it encourages your brain to create its own rich imagery, like a custom-tailored VR experience. This was especially interesting for mobile devices - small screens but rich sounds are the perfect platform for an audio game. It also allowed us to get away with some pretty insane scenes that would have been almost impossible to create visually!

Players’ responses to this were intense and fascinating. Panic and terror, zen-like concentration, adrenaline highs and sheer delight. Some players jerked wildly and broke into a sweat while laughing.

Q3: What is the best feedback you received from both sighted and visual impaired group?

A3: We were very happy to see that the game was highly anticipated in the visually impaired player community. We had many beta testers from the community help us out and provide feedback - one of the most important being to include text-to-speech on the menu system, a clear oversight on our part which we quickly rectified! After release the response was fantastic, often mentioning the serious arcade challenge and the non-apologetic dark humor that don’t settle for delivering to visually impaired players a watered-down experience, giving them instead a full-fledged, quality gaming experience - and even giving them an edge over sighted players.

A4: Good question! Honestly, a lot of the ideas in the game came from us playing around with different sounds for cars and then finding ways for them to make “sense” (if you can call it that) in the narrative. The ice cream truck felt like the right kind of car for a bonus powerup, and when we knew we wanted to make a crime-comedy adventure, why not make the ice cream psychedelic and belong to an ice cream mafia? The beauty of the freeform creative process of an indie game is that you can be spontaneous, go wild, and see what sticks with players through frequent playtests. Ice cream trucks were a crowd favorite from the very beginning.

Q5: How did you produce the game’s sound effect? Have any of the team members tried to experience a fast-moving car with their eyes closed?

A5: We get asked this question a lot! No, we didn’t try driving blindfolded (we have families!) but we did listen a lot from the passenger side. It was quite a challenge to balance the very realistic sound picture we were aiming for (immersing players in a fully believable car environment, with each sound layer at its familiar level), with the need for it to be interactive and playable. We had to do a very precise sound mix in order for this to work seamlessly, and keep the important game-related audio details clear at all times.

There were 3 main techniques we used to create the sounds in the game:

The first, used for passing cars, impacts, environment sounds and of course passing drivers’ profanities, was to use mono sounds and process them through a binaural HRTF filter. This gives each ear a correct spatial signature, allowing the player’s brain to reconstruct its position in space while allowing us to precisely control the timing and the sensation of the passing cars and to design the gameplay and difficulty.

The second technique was to record sounds using binaural microphones and a dummy head setup in our car. This was done mostly for effects such as sounds of the steering wheel, transition stick and dialogs in and around the player’s car, and gave very realistic results!

Lastly there are a few sounds that were spatialized in real time in the game’s engine, mostly the boss fights as their movement in the game is more dynamic and unpredictable - e.g. the helicopter, the police cars, and the gunman.

Q6: Who’s the main audience of Blind Drive? (e.g., female/male, hardcore gamer/casual gamer). Which country/region do you get the most feedback from?

A6: We designed the game to give something for everyone - a new kind of gaming challenge for the seasoned player, an intriguing sensory experience for the casual and curious, adrenaline-pumping action for the hardcore action gamers, and a sweeping and hilarious narrative for the story game enthusiasts. We think it worked! We’ve had very positive and varied feedback from all the above, on social media, Steam and at festivals both physical and virtual. Hearing what each one’s takeaway is from the game never gets old and is a wonderful experience for us as creators.

As for countries, the game definitely clicked with the English speaking audience in the US and in the UK, with most of our players from those regions. But we’ve also had very enthusiastic engagement from Japanese- and Chinese-speaking audiences, with the game making headlines and generating online buzz even before the game was subtitled in those languages. Now of course we have full, excellently translated subtitles for our fans there.

Q7: Grandma the in-game character is one of the iconic roles in Blind Drive. How did you come up with this character? Is the character based on a real person?

A7:(Spoiler alert) One of the central motifs in the game is the concept of “the mother”. While both the protagonist Donnie and the main villain are men, their self-absorbed belief in their dominance is slowly but surely shredded throughout the game by the many mother figures in the story - chief among them being Grandma Anita (a.k.a. “Blade Ears”).

Brought to life by the incredible voice talent of Gani Tamir, Grandma’s character goes from an early impression of a senile, harmless old lady, through a tough-loving and loud-mouthed grandmother, and all the way to the vengeful, power-hungry mastermind who ultimately takes matters into her own hands and leaves the men in the story as insignificant bystanders.

In many ways, Blind Drive is an ode to our own grandmothers - and the roles they played in raising our bratty little selves.

Ms. Tamir pulls all this off while staying true to the feminine figure of the Jewish grandmother, providing both the endearing comedic quality of the in-your-face critic as well as the caring, always-providing matriarch who has to clean up after the boys. This persona has been a cornerstone of Jewish families for generations as well as other cultures around the world

Q8: Please share with us one of the most impressive things or stories about Blind Drive.

A8: One of the biggest surprises we had while making the game was discovering the amazing skill range of human hearing. In the many hours we spent playtesting the game, we found it was hard to predict how good people will be at completing different levels. There was a very big range of skill levels compared to “regular” video games. For some, early builds of the game were incredibly challenging - even unplayable - and for others way too easy.

To make things worse, there was no correlation between how much gaming experience players had and how good they were at Blind Drive. For example, a musician and hardcode action gamer couldn’t get past the first level, whereas one of our mothers (D. A. Terre), a 70-year-old woman who never played a video game in her life, breezed through the first 5 levels and said “very nice”.

It was a huge challenge designing the difficulty of the game with these starting conditions, but ultimately very rewarding to be able to give something for everyone.

Q9: Does anything change after winning Indie Game Award 2022? What’s your next step after this interview?

A9: We were extremely flattered to have won this award, and are very grateful to the jury and audience for the support! Above all else it is confirmation that there is still room for the unexpected and the unconventional in games - and we love the opportunities this presents us as creators.

We’re very excited by the combination of sound, physicality, storytelling, and that sense of experiencing something familiar in an entirely new light - so we will definitely bring more concepts like that to our future projects.

Spatial audio in particular, especially in Virtual and Mixed Reality (XR), is something we are actively exploring for its potential to create immersive and engaging experiences that challenge and excite new facets of our senses.