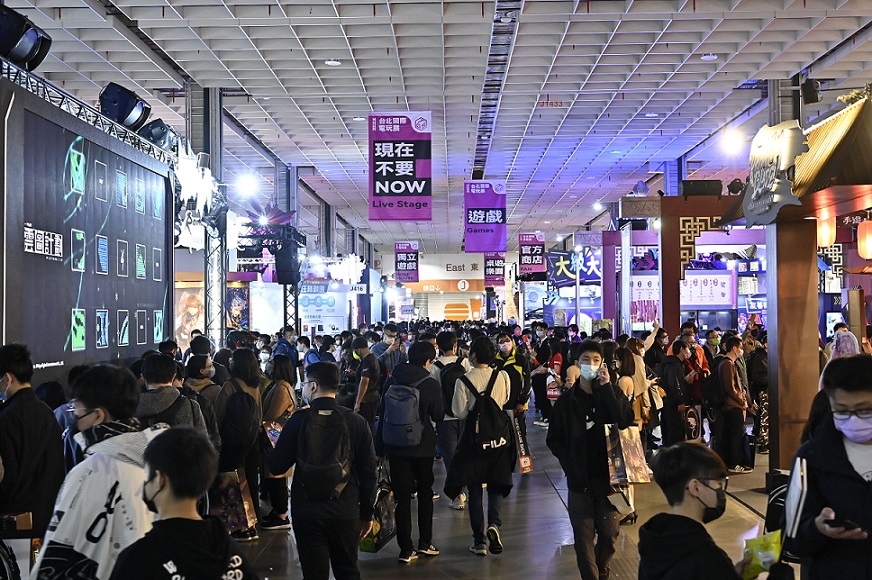 Taipei Game Show 2022 (TGS) has come to a close today. Over the past four days, the B2C Zone has been swarming with visitors every day, all of them following the anti-pandemic procedures that gave them peace of mind as they enjoyed the exclusive events of their favorite games. Equally exciting was the Taipei Game Show ONLINE virtual event during the night. Many upcoming console releases scheduled this spring shared their latest information that sparked enthusiastic discussions among gamers worldwide. The B2B Zone, which was kicked off earlier as an online event, successfully created 200 international business matching virtual meetings. The Asia Pacific Game Sumit (APGS) was equally successful with ample media coverage globally. The Metaverse Forum ended on Jan. 24 (GMT+8) with fresh new perspectives that help Taiwan make its headway into the era of metaverse. Through a hybrid of live and virtual events, TGS has made visitors on the show floor as well as gamers and industry professionals over the Internet all walk away satisfied. Regardless geographic boundaries and the pandemic, APGS and TGS B2B Zone created a virtual exhibition experience in the cloud with realtime connection

APGS and TGS B2B Zone attracted nearly 400 vendors/buyers from over 34 countries/regions to participate over the Internet, exchanging over 5,000 business cards and holding 200 business matching meetings. Both domestic and overseas game developers and publishers were able to seek partnerships across geographic borders. Going forward, TGS will continue to host theme-based quarterly business matching meetings to create more business opportunities for the industry.

This year, APGS hosted both online and live sessions with an outstanding lineup of expert speakers. Over the course of its two-day agenda, the online sessions on diverse topics accumulated nearly 100,000 views. Both Chinese and English subtitles were provided throughout these sessions, enabling viewers spoke different languages to engage in realtime interactions over the Internet. The live session Metaverse Forum, on the other hand, invited pioneers in multiple areas to share their insights on various topics in this metaverse trend. The forum attracted a huge passionate audience that actively engaged in the session. Cosplayers went all out on the show floor in the B2C Zone, while "JUST DANCE 2022" put on a good show on the stage of TGS eSport Red Carpet

The last day of TGS continued to see an endless stream of visitors. Major exhibitors sent out the most amazing cosplayers on the show floor to draw visitors' attention, while the visitors were catching their last chances to take picture with their favorite game characters. The stage of TGS eSport Red Carpet rounded off this year's agenda with action-packed tournaments that kept the crowd hyped at all times. The upcoming Chinese New Year has definitely boosted the sales in the Board Game Wonderland as visitors looked for board games for the family reunion. As a thankful response, the publishers offered exclusive "surprise grab bags" that became an instant hit among visitors. Likewise, Indie House was crowded early on each day with visitors waiting in lines for their turn to try the games. The developers all maxed out their last day to engage with gamers and gather feedback. On the last night, 2022 Taipei Game Show ONLINE featured the title much-anticipated around the world—Elden Ring—in its final episode. The producer of the game from the FromSoftware revealed in the interview the premise of the in-game worldview and the playtime of the game and answered many questions from the gamers.

Three days in a row, the program provided the latest, and many exclusive, news across console, mobile, and cross-platform games as well as board games and indie games. So far the 10 episodes of the program in total have accumulated nearly 1 million views and countless comments across multiple broadcast channels.

With the joint effort of the organizer, the exhibitors, and the visitors all looking to keep the "Gaming Forward" sprit, the 20th Taipei Game Show has come to a splendid end.